Kayaking in the Gulf Islands archipelago with the wind and tide at your back is like being in heaven. I love to view the gentle Salish Sea from wave level, feel the warm sun on my back and savour the silent solitude. It’s a spiritual experience.

I often paddle from Pender to Saturna Island with one stroke rhythmically, almost hypnotically, following another as my kayak slowly crosses Plumper Sound. Occasionally a snort sounds and a smooth seal’s head pops out of the water 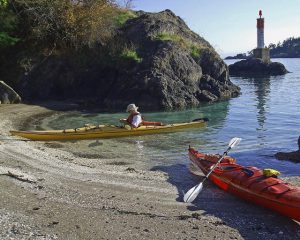 , a curious companion monitoring my progress. At Taylor Point I beach the kayak and explore the ruins of the old Taylor home and the remains of the quarry that supplied stone for many buildings in Victoria a century ago.

Because the Java Islets, on the southeast side of Saturna, are uninhabited and part of the Gulf Islands National Park they are like a wildlife refuge. Drifting silently with the current I see dozens of seals watching me with sad liquid eyes, cormorants stretching their black wings like preachers blessing their flock and great blue herons with their beaks poised to spear a fish.

At Portland, a trail leads around the island, passing coves lined with bleached driftwood logs and meadows dotted with purple wildflowers. An old apple orchard is a reminder that Portland was settled in the 1880s by Kanaka (Hawaiian) immigrants. Best is a dazzling white beach formed by broken clam shells, the remains of millennia of habitation by Coast Salish First Nations. 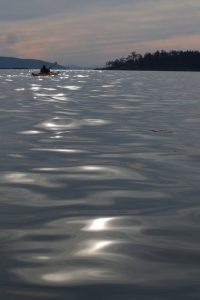 Once a year I paddle to Rum Island, aka Isle de Lis, and camp overnight. There’s an edgy feeling for I’m like Crusoe, alone, an entire island to myself. At dusk, fading light shimmers on the water as seals frolic in the darkening bay. A little later, a million stars twinkle in the sky.

When paddling, I know the ocean below the kayak teems with life, yet it remains bafflingly invisible. And the currents are ever-changing for the islands and tides interact in complex ways. Sometimes the water is dead still. Other times the current is fast with little whirlpools dotting the water. And sometimes on calm water, a train of seven or eight huge waves will suddenly roll past.

There are so many delicious kayak destinations including Mayne Island and the Japanese Garden; Salt Spring Island and Ruckle Provincial Park; and Prevost Island with its long, narrow inlets like mini-fiords. 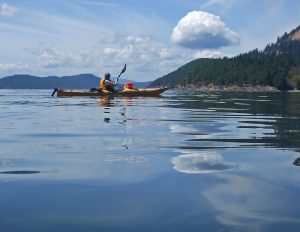 Paddling on the Salish Sea brings peace to the soul.