During this covid isolation I’m enjoying spending time in nature. Bays, coves and headlands, that fascinating transition between land and the sea, fascinate me. On Pender and the other southern Gulf Islands, the shores are seldom covered in glistening white sand. Instead, rocky outcrops abound, rows of bleached logs mark the high-tide line and many lifeforms skitter here and there. It’s wonderful.

I have to tread carefully for the shoreline usually is composed of rock, sometimes conglomerations of rounded stones,

sometimes like rows of cogs in a factory assembly line, other times grey sandstone with beautiful whorls and patterns created by erosion.

These sedimentary rocks were laid down about 70 million years ago in a basin. The collision of the Pacific and North American tectonic plates, which is still ongoing, subsequently folded, faulted and contorted the sedimentary layers into the island archipelago we see today.

The seashore is blessed with a cornucopia of life. The broad-leaved stonecrop with its yellow flower perches precariously on rocky cliffs. The brilliant orange of California poppies brightens many locales. I enjoy sitting beside them with a grand vista before me. Down below, the shallow water embraces many seaweeds, but I’m 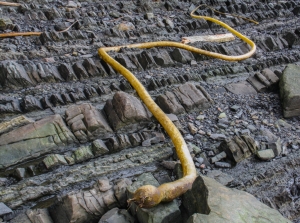 attracted to sea lettuce, which is delicious in salads. The mighty bull kelp is often washed up, looking like a long python coiled among the rocks.

Many coves provide glimpses into the activity of humans in past times. White beaches and layers of broken clam shells (middens) show that Coast Salish First Nations have lived in this area for millennia.

A factory at Bricky Bay on Pender Island manufactured bricks from 1910 to 1920. Many still r 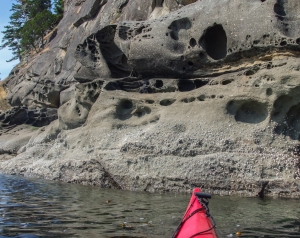 emain, transforming the beach into a red colour.

Another favourite spot is Georgina Point on Mayne Island with its lighthouse guarding the eastern entrance to Active Pass. The grey sandstone along the water’s edge is like an art gallery with fascinating whorls and pits like alien eyes and faces.

Driftwood logs fascinate me. I can sit for hours on one of the sun-warmed logs that form a wooden necklaces for coves, admiring the view and feeling content

to be part of the glorious complexity of nature.