One day in April, I peered from a cliff down into an eagle’s nest balanced near the top of a Douglas fir tree. A bald eagle mother with a two-metre wing span and lethal talons and beak was ever so gently placing food into the tiny beak of her three-day-old chick. A touching scene.

We’re fortunate, for eagles are an iconic sight in the Gulf Islands. Their nests are near the tops of tall Douglas fir trees an 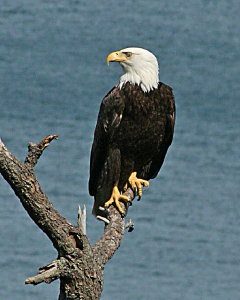 d usually within 100 metres of the sea. Over four months I watched as the eagle mom incubated two eggs and then lovingly nurtured the single chick (the other egg never hatched).

For four years I studied this eagle pair and bonded with them. I learned that eagles mate in February and usually lay two eggs around the end of March. The female incubates the eggs for about 35 days, with occasional help from the male. Once hatched, eaglets are fed by both parents; at six to seven weeks they start feeding themselves.

By the end of June chicks are as large as their parents but still have not left the nest. They are dark brown in colour, and do not develop the 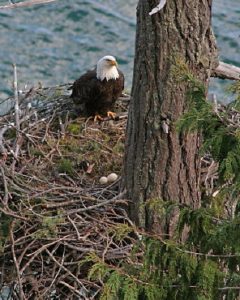 distinctive white head and tail feathers until they reach adulthood at about four to six years.

Finally, in early July, eaglets are ready to fledge although it takes some coaxing by the parents to get them to take that first flight.  Surprisingly, they are bigger than the parents because the initial, temporary feathers are larger to help them fly.

In September, most eagles leave their territories to catch salmon and socialize in spawning areas, returning later in the fall. Then the young eagles find their own territories and start the life cycle once more.