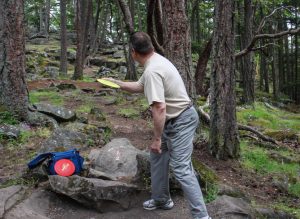 Hidden away in the forest deep in the Magic Lake area is one of the finest — and least known — treasures of Pender Island: a disc golf course.

On a recent weekend the forest resounded to thumps, clangs and happy shouts as I arrived to play. With its hilly contours and stately Douglas firs, western cedars and gangling arbutuses, the course is considered one of the most picturesque in North America.

Disc golf is just like regular golf but instead of hitting a ball, you throw a plastic disc that looks like a Frisbee. Starting in the tee box, you keep throwing down the course until your disc lands in a chain basket or strikes a pole covered in metal so it makes a ringing sound. The objective is to take the minimum number of throws. The top players carry more than a dozen discs, using different ones for driving, putting and curving around trees, which have an annoying habit of getting in the way. Novices play along just fine with one or two discs. The game is totally casual. There are no waivers to sign, no tee-off times; you just show up and start to play. Best of all, it’s free (except for tournaments)!

Disc golf is played around the world and is particularly popular on the west coast. Courses are also found on Salt Spring Island and Mayne Island.

I joined three friends and started. With many errant shots my score climbed embarrassingly quickly. But it was a lot of fun.

After the game, I nursed a bottle of amber fluid and thought I detected the smell of a well-known BC product wafting through the forest. What a wonderful day! 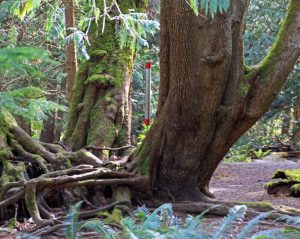 If You Want to Play