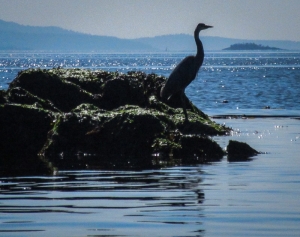 In the Gulf Islands, the sea is a big part of our lives, but what lies underneath the waves is largely unknown. While paddling a kayak and logging GPS coordinates along the east coast of Pender Island, I realized citizen scientists are helping shed light on this mystery. I was part of a dozen volunteers measuring the extent of kelp forests. Along with fellow “scientists” on Mayne, Saturna and Galiano Islands, we were helping determine the health of the Salish Sea, a productive ecosystem rich with marine life.

Citizen science — the term was only coined in the mid-1990s — allows scientists to greatly expand their shrinking budgets, and also makes science 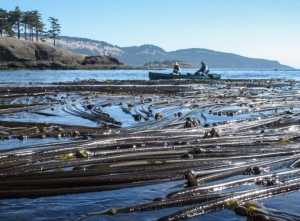 accessible to the public. Ubiquitous cell phones with their wide range of apps can be powerful tools in the hands of ordinary citizens. For example, database apps such as iNaturalist and Zooniverse allow a wide range of observations to be recorded and shared. It’s easy to become a volunteer, and it’s great to feel like a scientist! 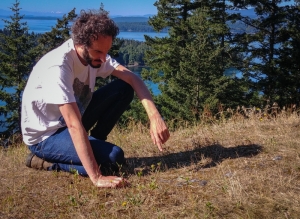 On Galiano Island, Andrew Simon, an expert on lichens and mosses, is the driving force behind Biodiversity Galiano, which started in 2016 with more than 200 contributors combing the island to list every living species. By 2020, more than 3,500 had been recorded. Andrew pointed to tiny three-ranked knob moss at Bluff Park, the only spot in Canada where this species is found. Galiano also boasts a huge ecopark, the Millard Learning Centre with 188 acres bordering the ocean. The Park, run by the Galiano Conservancy Association has hiking trails, an organic garden, solar panels and more.

Rob Underhill is the lead for citizen science on Mayne Island. 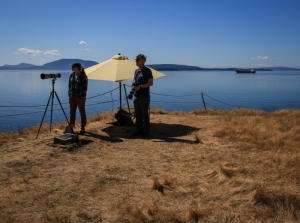 In June 2017, Pender Island was abuzz with a BioBlitz, a one-day nature extravaganza. Scientists, Parks Canada interpreters and the public worked together to spot as many species as possible. People scooped in the lake with nets. Divers roamed underwater bringing back sea stars, sculpins, gunnels and sea cucumbers. People crowded around information stations with displays and microscopes. The night 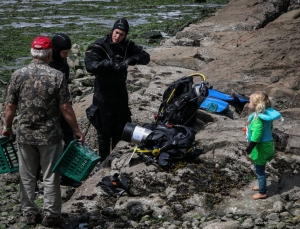 expedition showed glorious bioluminescence in the sea. Young people — and even older folk — enjoyed learning about the fascinating complexity of nature.

Forest Bathing on Pender Island In Praise of the Lovely, Luminous Swamp Lantern
Scroll to top