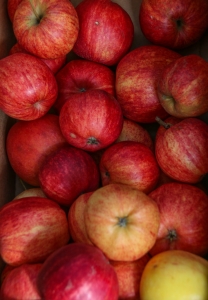 being transported back to pioneer days. Apples arrived in boxes and containers, some so heavy they could barely be carried. Under a blue sky on October 31, people — all wearing covid masks — took turns manually cranking the press to make apple juice pour out the bottom. Others peeled and cut apples, which were cooked to make sauce and then placed in jars and processed in a pressure cooker. Others used a rotating device to slice apples and then placed the thin, round apple pieces in a dehydrator. This was the inaugural “Let No Apple be Wasted” apple preservation workshop at the Pender Island Community Hall. 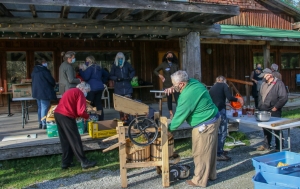 The apple bee at Pender Island with press in foreground.

Organized by the Southern Gulf Islands Community Resource Centre and the Gulf Islands Food Coop, the purpose was to teach islanders how to use the press, dehydrator and pressure cooker to transform the bumper crop of apples into sauce, juice and dehydrated apple slices that will be enjoyed over the coming winter. About 500 pounds of apples arrived from trees scattered all over the island. 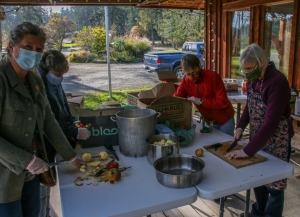 Like in olden days, it was a communal effort with everyone pitching in and sharing the juicer, pressure cooker and dehydrator. And it was fun! We worked together, chatted, joked and gossiped. By the end of the sunny afternoon, the apples had transformed into numerous litres of juice, many jars of apple sauce and slices of dehydrated apples, which were distributed to those who brought the apples, shared with other participants and used to help fill the CRC Christmas hamper. Even local sheep and horses were smiling, for they received the remaining apples. Farmers used the apple mash from the juicer for compost. 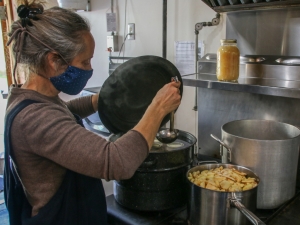 Similar workshops were successfully held on Mayne Island on October 6, where the products were donated to the food bank, and Saturna Island on September 19, where about a dozen people took part. On all three islands, the Gulf Islands Food Coop purchased the ten-rack dehydrators and pressure cookers with the goal of holding annual apple work bees in the future, and so people could borrow the (communal) equipment at other times. 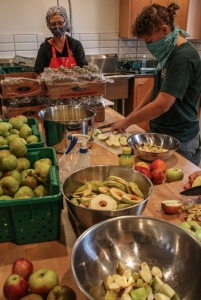 As one participant said, “What an enjoyable day! I’m so glad they’re bringing back heritage activities like this; they really work. And nothing tastes bet  ter than local food.” 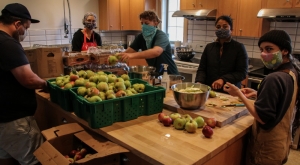 Under the masks, these Mayne Islanders are smiling.