What better place to visit in the middle of a pandemic than Saturna Island? It is like an isle forgotten and with only 370 inhabitants it’s easy to self-isolate. Ferry access is infrequent and many conveniences like banks and Starbucks are completely missing. I explored this island-onto-itself on a sunny summer day on my trusty 49-cc scooter.

I almost missed the “business centre,” barely more than a crossroads with a general store where old-timers sit on the porch, a recycling depot, fire hall, a smattering of residences and a large recreation centre.

Next, East Point drew me. A heritage lighthouse — built in 1889 but now converted to a muse 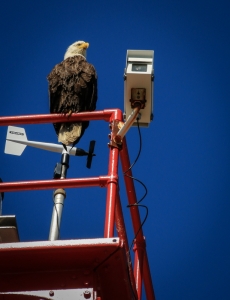 um — looked over the quintessential Salish Sea with tidal waters churning over Boiling Reef, attracting endless wildlife from sea lions and seals to humpback and orca whales to a myriad of birds. A bald eagle perched high on the weather station beside the new lighthouse, its head slowly swiveling back and forth, patiently watching. The shoreline is a dreamscape of honeycombs and alien, yet beautiful, shapes for erosion has carved the most unusual rock sculptures.

Saturna has more park land per capita than any other Gulf Island, with almost half the island part of the Gulf Islands National Park Reserve

For such a small island, Saturna hosts surprisingly advanced research. SIMRES, which

stands for Saturna Island Marine Research & Education Society, uses a small network of underwater hydrophones to monitor the sounds of passing whales. It also hosts a series of popular sea talks given by experts on marine science and ecology.

Later, my scooter bumped up the steep dirt road to the top of Mount Warburton Pike where I gazed upon a feast of islands dotting the Salish Sea. Although I heard the bleating of the famous feral goats, none appeared. Soon my scooter took me down a steep road to the Feral Goat Winery, which is under new ownership, and

I back tracked to Winter Cove a serene spot that every Canada Day hosts one of the most unusual celebrations in the country.  The population of the island more than triples as an enormous flotilla packs into the cove. About 30 lambs are roasted on tall iron crosses like crucifixes set in a circle around a blazing fire. The sight is pagan, but the result is mouth-watering. The event, which features a band, craft 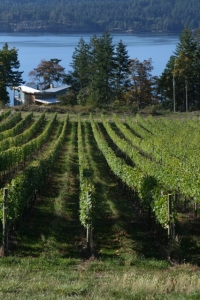 fair, dunk tank and contests for children and adults, is a true community effort with virtually every person on the island contributing.

Tired and sun burnt, I bumped onto the ferry, sorry to leave this glorious solitude.