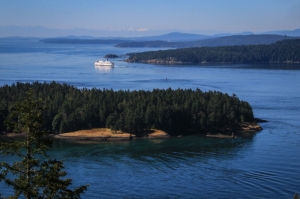 I’m fighting the Covid blues by exploring each of the southern Gulf Islands on a 49-cc scooter. Last week, I puttered around Galiano Island, reveling in empty roads, great ocean vistas, friendly locals and the amazing natural beauty of this long, narrow isle, all under a blue, sunny sky. After gassing up (only $2.75!!!), I bumped over an unpaved road to Bluffs Park, which offers outstanding views over Active Pass and numerous islands gracing the Salish Sea. Andrew Simon, organizer of Biodiversity Galiano, showed me some three-ranked knob moss, whose only Canadian locale is here on this bluff. 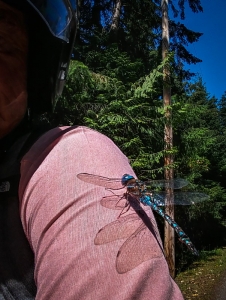 Next, I passed the highly regarded Pilgrimme Restaurant (open for takeout and dine-in) and arrived at Montague Harbour, one of the most popular — and prettiest — boating spots in the province. I lazed and caught a few rays while watching sailboats dancing on the waves, kayaks paddling past and a lone SUP silhouetted against distant blue ranges.

Leaving, a gorgeous blue dragonfly, hitched a ride on my arm, and I had a heck of a time snapping a selfie of us at 40 km/hr. On the long ride to the north end, I stopped at the Millard Learning Centre, where the Galiano 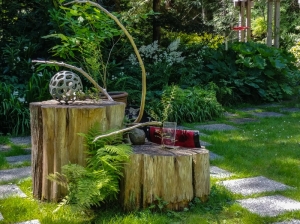 Conservancy runs numerous teaching programs that demonstrate the vast biodiversity of the island on a stunning site with old growth forest, hiking trails, glorious ocean front and much more.

A few kilometres later, I admired the creative, colourful glass sculptures at Marcia DeVicque Glassworks, one of a multitude of artisan galleries. Pulling into a small cove, I marveled at sandstone rocks eroded into intricate honeycomb sculptures. Most unusually, even a few caves had formed with cool smooth walls. 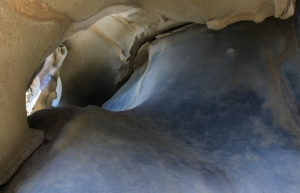 Arriving at the north end of Galiano, I was told the residents are quite different in character from those at the other end.  Isolation is part of the charm, for although the north has its own community hall and fire department, there are no shops nor a gas station.

On the long putt-putt back to the south end, I stopped at Lovers Leap, where a musician played his guitar while enjoying the hot day, vast blue sky and the high view across to Salt Spring Island.

After a socially-distanced burger and pint at the Hummingbird Pub, I headed for the 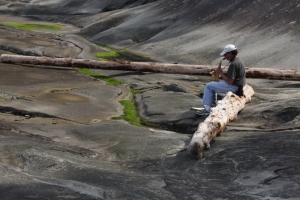 ferry, sad to be leaving this treasure of an island.