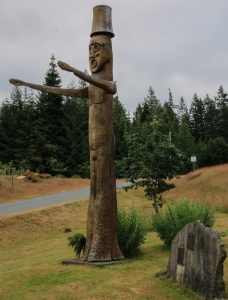 Feeling like Easy Rider, I bumped off the Queen of Cumberland at Village Bay, Mayne Island, on my “hog.” OK, it was only a 50cc scooter, but perfect for exploring the 21-sq-km island with its sinuous roads.

A short ride led to Felix Jack Park where a carved, cedar Welcome Figure towered, announcing this isle was initially home to the Tsartlip First Nation.

At Miners Bay I viewed the Agricultural Hall (established 1900), a central hub of the community and the site of the thriving Saturday Farmers Market. The Springwater Lodge (established 1892), the oldest continuously operating pub in the province, beckoned, and soon I was quaffing an ale on the deck while ferries sounded deep throaty warnings in Active Pass. Initially, the Lodge served the men rowing from Victoria to the mainland for the gold rush. 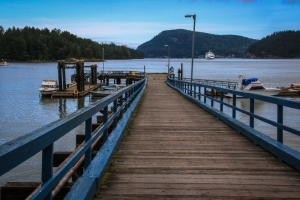 Occasionally joined by smugglers and cattle rustlers, they partied so hard the Lodge became known as “Little Hell.” Little wonder the first gaol in the Gulf Islands, now converted into a museum, was built in 1896 just up the street.

My scooter carried me to the nearby St. Mary Magdalene Church (1897). The dates on the tombstones in the quiet cemetery confirmed this to be another historic site. 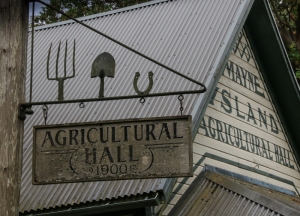 At Georgina Point I lay on smooth, sculpted sandstone soaking up the sunshine while admiring the Active Pass Lighthouse (1884), one of the prettiest on the west coast.

Riding through Douglas fir and arbutus forest, past roadside stands and farmers’ fields, took me to Bennett Bay National Park. I hiked to Campbell Point where kayaks bobbed in the glistening waves. I learned that Mayne is blessed with hiking trails offering glorious views of seashore and forest, here 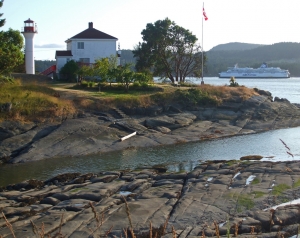 and at Mt. Parke and St. John Point parks.

At the elegant Japanese Gardens, I sat in the meditation pavilion, reflecting on the sad time during World War II when the island’s Japanese, who formed a third of the population, were removed to internment camps, their farms and possessions confiscated and never returned. In 2002, the islanders built this Garden to honour these early neighbours.

Next, I stopped at the Mayne Island Brewery and sampled a Forager Ale, made from whatever the owners discover in the forest. Refreshing!

As the ferry pulled out from the dock, I was happy. I had discovered that Mayne Island is indeed a jewel of the southern Gulf Islands with fascinating history and rich nature.